25
Wizard 2017 is a new adventure. Players had to work together to rebuild Hograts.

This event is a community event, and as such requires everyone to contribute to overcome milestones. Everyone in each server had to pitch in to reach goals.

After the last milestone was completed, every resource was shown at the collection spot, (even the plant, which never was part of a milestone). This showed a tally of how much everyone has collected, and also allowed consumables to be awarded for any item.

On the event map, you must collect resources (by ducking on them) and bring them back to the spawn. A shaman is chosen on the map to help. If you die you respawn. Hitting the water while holding a resource causes you to lose the resource. Depositing resources has a random chance to award a consumable.

The event map comes every 20 minutes.

Getting a x3 item won't earn you 3 towards the calendar; it only counts as 3 for milestones

You are also able to combine certain resources to create new items! Items are combined by

high-fiving someone who has the other item. Make sure to not accidentally deposit the item before doing so!

Finishing a goal on the calendar earns you 20 adventure points, as well as one of the rewards below. Collecting resources also award a random consumable (assuming the resource collected is part of the current milestone). 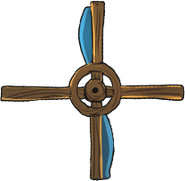