He currently resides in a manor in the town of Kürbisses-Nacht.

He owns a decorative gravestone in the Kürbisses-Nacht cemetery. This is not because he is dead, but rather because gravestones are very popular among the vampire mouse community and are used to show status.

A portrait of him before his turning, showing him as a mouse, is also available as a decoration to be placed in maps.

An artifact of him was found during the Fishing 2015 event—an old portrait of him. The artifact currently resides in the Transformice Museum.

Archain von Drekkemaus, formerly a mouse, wears a black cape that has wings that wrap around the back of his neck. There is a ruffled collar bib around the front of his neck. His hair is short and black, curving down.

When he became a vampire, his color turned grey and he received long pointy ears. He also has worn-down fangs that appear to be harmless instead of sharp. He holds a key in his hand that does not have a named purpose yet. Since the Halloween 2021 event, he no longer holds a key.

He has been cursed by an unknown mouse or vampire, and he cannot leave his manor unless it is Halloween. It is unknown whether or not this was because he was cursed to become a vampire mouse and this is simply a side effect, or he was given two curses. The first assumption seems to be faulty, as vampire mice on survivor maps obviously roam freely. The only exceptions to this would be that either all vampire survivor maps take place in Drekkemaus's manor or vampire maps are non-canonical.

Drekkemaus has an official relationship with Buffy, and both of them have a child named Voldemouse. Although this child's backstory is unknown as of now, there may be an enigma that reveals information on the family in the near future.

Von Drekkemaus can spawn bats by clapping, and his other traits include being able to live without his heart in his body (although the heart must still remain intact). He also drinks fresh blood as a substitute for wine. Although he is not very talented in pumpkin carving, he feels as though it is with good intentions to engrave someone onto a pumpkin. Drekkemaus possesses talented calligraphy skills and uses a shaman quill to write with. Some believe that he wrote his love letter to Buffy in either the halls from the Halloween 2012 maps or in his library. Drekkemaus is also a pianist and a brewer as well as a writer. This is proven by the various pianos and brewing stations in his hallway and loft.

Von Drekkemouse can be found in the Mice Village, where he runs a store. As of January 2021, he offers: 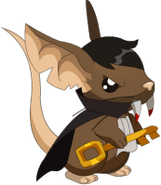 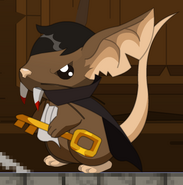 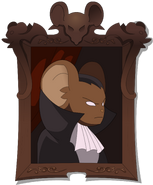 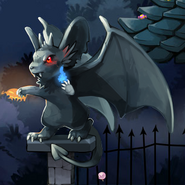 A removed statue of him on his manor's wall, exaggerated and without pointy ears.

A statue of him in his manor's casino

Fantasizing about Buffy in the Halloween 2014 enigma 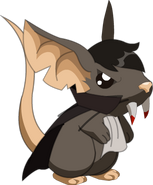 Drekkemaus, along with Buffy and Voldemouse, appearing on the photo board during 6th Anniversary
Français Polski
Community content is available under CC-BY-SA unless otherwise noted.
Advertisement