Transformice is a free online multiplayer game created by Melibellule and Tigrounette owned by Atelier 801. The objective of this game is to collect cheese playing as a mouse character, and take it back to the hole in exchange for a currency, not surprisingly named cheese. This cheese can be spent on items, map creation or other things, such as starting up a tribe of mice. In the majority of maps, a shaman is needed to aid in getting the mice to the cheese and into the mouse hole, using wide selection of tools that can be conjured by the shaman to create various contraptions to get to the cheese.

For a full list of all the game's updates, see Game updates (current: V1.708); and for a list of previous events, see Event.

[Other] Goodbye Melibellule 12 January 2022
Melibellule is leaving Atelier 801 to pursue a new professional project that is aligned with her values and addresses climate change.
[Game] Tomb Rumble released 15 September 2021
Tomb Rumble is now available to play on Steam.
Transformice badge

can be unlocked by buying it for 100 coins from Sallah's shop in Tomb Rumble.
[Game] Antarès 31 July 2019
Space! Adventure! LASERS! Find all this and more in Antarès! Build your own ship and test your skillz against other players, showing everyone who the #1 spaceship pilot is!
Play game
[Game] Transformice Adventures! 18 May 2019
Do you like mice? Do you like fantasy? Do you like epic combat? No? Oh. Well you should check out Transformice Adventures anyways! The game is currently on kickstarter, and until 7 June 2019 a demo of the game is available to play! You can not only play the game on a browser, but on Steam as well! Join the madness! (Discuss)
[Other] New nickname system 12 March 2018
A # system was implemented for usernames, allowing players to choose any username, even if it was taken before. Players who registered before this system have been given a free name change. This applies to all Atelier 801 games. (Discuss)
[Other] Dead Maze released 13 February 2018
After years of work and months of testing, Dead Maze is now available to play! The recommended way to play is through Steam, although you can also play online at deadmaze.com or on sites such as Armor Games.
[Other] God's Paw minigame 25 April 2017
As part of the Ludum Dare 38, Tigrounette and Melibellule have made a new minigame, God's Paw! It requires no login/password to play and is made in HTML5 instead of Flash. Play game
[1.356] New Community platform. 8 February 2017
"Hello dear mice! Some news regarding the new community platform: the big update will take place this Wednesday. We wanted to make sure that this new platform would be as nice and clean as possible for you to enjoy."
[Other] Win a Transformice plushie! (ends on 1 February 2017) 23 January 2017
Announcement: "Follow us on instagram.com/transformice/ to have a chance to win a Transformice plushie! We will draw one of our lucky followers on February the 1st!" (source)
Featured videos 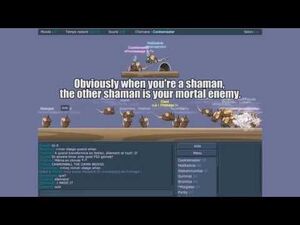 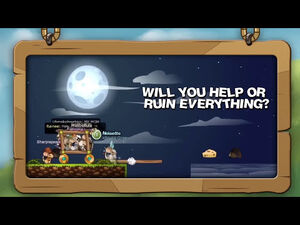 About the wiki • Policies • Style guide • Staff • Getting started • Links
Sandbox • Privacy policy • Copyrights • About protected pages • About templates • Community Portal
Transformice is copyright 2010–2022 Atelier 801. The Transformice Wiki is in no way affiliated with Atelier 801.

Have a Transformice question but can't find the answer on the wiki? Visit the help channel in the Transformice Discord.

Want your community included? See how!

Want your community included? See how!