The Transformice Ski Resort is a site where mice can practice their skiing skills against obstacles at every checkpoint.

It first appeared during the Christmas 2015 event. Presents are awarded to mice who perform stunts and jump high, as well as avoid the previously mentioned obstacles. Ski gear is free and is a complementary gift for every mouse who visits the slopes in the resort. Reindeer dainties follow their caretakers as well, and sometimes struggle catching up to them due to the sheer speed that increases by the second.

Some individual beings that are known to hang around the obstacle course setting of the resort include penguins and 'derp' birds, and some hope that in the future they will be available as dainties. The 'derp' bird was first discovered during the Fishing 2014 event as a relic piece. The fully-clothed penguin first appeared during the Christmas 2014 event, also as a relic.

Currently, the inside the Ski Resort has not been seen before, but the slopes have already been released to the public as well as a view of the resort lodge's exterior.

The obstacle at some checkpoints of the course.

A checkpoint of the obstacle course for the Transformice Ski Resort. 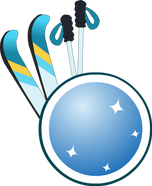 Cartouche as a souvenir of the resort's ski gear.

The ski resort lodge seen from a distance.
Community content is available under CC-BY-SA unless otherwise noted.