Transformice Adventures is a multiplayer action RPG developed by Atelier 801 and set in the world of Transformice.

The game was set to release on Windows, macOS and Linux in December 2019, with mobile possibly coming later. However, the game's Kickstarter was cancelled on 21 May 2019.

As part of its Kickstarter, an ear item

and a tag consumable

were released in Transformice. A pet

was also added to the game files but remains unreleased as its social media achievement was never reached.

Prof. Munster art by Melibellule that did not make it to the Transformice Adventures demo. 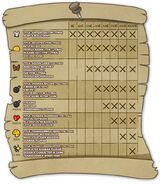