Transformice (TFM) is an online multiplayer Flash game released on 1 May 2010. It was created by Melibellule (artist) and Tigrounette (programmer), who later formed the company Atelier 801. It is written in ActionScript 3.0 and the flash-port of Box2D.

While it started in French, it is currently available in over 30 languages.

Transformice requires either a web browser running Adobe Flash Player 9.0+, Adobe AIR to run the official standalone, or Steam to play the game.

The gameplay in the game is straightforward: in a variety of maps you have to find and carry a piece of cheese back to a mouse hole. Some maps have complex puzzles involved which can only be solved with the help of the all-powerful shaman, who is chosen based on the high score. Completing maps will result in being awarded with titles and cheese. Cheese allows you to buy clothing items in the shop.

As a mouse, you have only one goal: collect the cheese and navigate back to the safety of your mouse hole with or without the help of the shaman. The mice can just move around using the arrows keys (or WASD keys) to duck, jump, and move.

The shaman is a mouse with the additional ability to summon objects, and in some cases must help the regular mice to overcome an otherwise insurmountable obstacle. Shamans are distinguished from the other mice by various markings on his fur and by a feather on their head. The array of objects the shaman has access to varies from map to map: in one map the shaman may spawn their full repertoire, in the next the shaman can only draw a path by using the conjuration. As the shaman, your controls are a bit more advanced and you will need a mouse or touchpad; see the complete list of controls here.

Transformice can trace its beginnings back to April 2008, when Tigrounette released Aaaah!, a game with similar mechanics. In Aaaah!, players controlled stick figures and navigated through a dark, silhouette-based map to reach a pharmacy. One player, with the most points, would be designated as a "guide" and was supposed to help the other players reach the pharmacy by drawing a path. Players could press the spacebar to scream loudly and push away any nearby characters. Like Transformice, it had a similar online room system, but did not have an English translation. Aaaah! did, however, feature a map editor, which spawned a rather large community of custom map makers.

Aaaah! was followed by a much closer ancestor to Transformice called Poisson (French for fish). Poisson was a short-lived Flash game that was effectively an early prototype of Transformice. Instead of mice looking for cheese, there were fish trying to get back into a water bowl. The fish, however, had the unfortunate tendency to slide all over the place. Like Aaaah!, it featured multiplayer gameplay with a guide who was supposed to help the fish to the fishbowl. However, instead of drawing a path to the objective, the guide in Poisson had to place physical objects in the world. In addition, the guide had no physical presence and could place objects anywhere on the map.

The objects available were very similar to the ones in Transformice. All the Transformice base objects, plus some additional ones were available to the guide in Poisson. Unlike Transformice, Poisson listed all of the available anchors in the object pool, and did not have as many anchors available as Transformice does. In addition, the guide had the ability to stop time for a few seconds, which made placing objects much easier without having to worry about the hopping fish. Interestingly, the fish always started on the bottom left and had to reach a bowl on the top right.

Poisson was online for a few months before closing pending the release of Transformice on 1 May 2010. Transformice refined the basic concepts introduced in Poisson, changing the objective to grabbing cheese and getting back to a hole, with a shaman that had a physical presence and limited powers. Several updates to the game added battle stages for shamans, an item shop, and several other small additions. Finally, an English translation was added to the game, which, combined with a viral video about the game, allowed a much larger audience to enjoy it.

A list of updates is available at the game updates page. 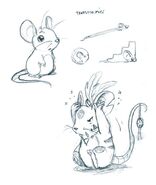 First ever Transformice screenshot by Melibellule 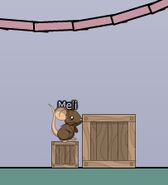 One of the first Transformice screenshots by Melibellule