Your objective is to run to the far right of the map to encounter a Witch Boss. This witch boss is 1 of 5: Pink the Waterfall Witch, Yari the Garden Witch, Alan the Hotland Witch, Choco the Lich Yard Witch and Tayla the Unknown Witch. On the journey to the Boss area you'll notice little chests - you can open these by pressing Space over them. You might not get anything, but if you do you'll receive consumables like pumpkins, chickens, but only 1 of each. Now you have reached the Boss Area.

To defeat the witches, you will see two platforms in the air. On the far left and the far right you'll be able to use a trampoline/water to get to them. When the boss spawns, there will be a red arrow/text signifying the weak spot area of the boss and you will need to avoid the areas with !!!!!!! marks. If you don't avoid these areas, you will die. You have 5 lives so if you die you have a few more chances. You'll see at the top of the map your health remaining and on the right side the Boss' health remaining. In order to deal damage to the boss, everyone has to spam Space over their weak spot. When you defeat the boss, you will receive a puzzle piece corresponding to that boss as well as a counter showing how many times you've defeated the witches.

You must do this spell on Pink's map first otherwise you may not progress through the rest of the engima.

After casting the spell, you will get text in your chat revealing the second spell.

Wow
!06wwwwW
yyou know
I'vvvve been watching YOU fooor some ttttime now
annnnnd
I reAAAAAaA
I really don't appreciatee what you're doin
ddd
doing
messing my rituALs uP
09
ttt07
there wIiLL be
consequ30encccccccccccc


This reveals the next spell command - it's all the numbers.

Ss5Stop it
oR 1'LL mmm
mess Up yyyyYyyour g4m
game00


The spell is revealed through the numbers.

You unlock this spell from entering Choco's map and receive this message:

When it is deciphered, it reveals the final spell. 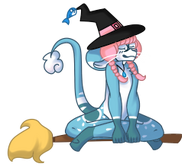 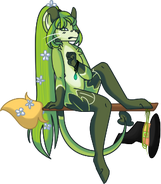 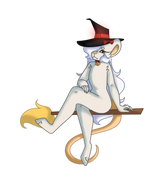