Warning: The shaman wants to eliminate all the mice! Be the last mouse standing to win. 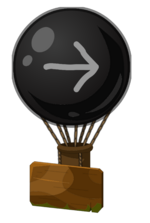 The shaman will attempt to kill the mice using their creativity, brutality, skills, and items available to them while the mice try to survive until the round ends.

Only survivor maps are played in survivor rooms, and most maps do not include cheese, and none include a mouse hole.

Usually, the maps are designed to fit the survivor theme. This includes grounds mice can wall jump on, bouncy cloud blocks for cannonballs, high areas reached only by jumping on cannons, etc.

In some maps, the shaman might be isolated from other mice, preventing "hugging" (mice sticking close to shaman, so the shaman has to endanger himself to kill the mice) and ease the task to kill all mice.

Survivor maps always start with a 90 seconds timer, and bonus time from Spiritual Guide's Additional Time skill won't give any effect, and time left will be set to 20 seconds if all vampires/the shaman dies while there are more than 20 seconds left.

The mice's objective is to survive the round until the timer ends. Avoid objects summoned by the shaman that may kill you, and don't stay too close to the shaman to avoid meeping (see below).

Wall jumping is mostly required, the mice can also use cannonballs summoned by the shaman to reach higher places, which will increase the chance of survival.

The shaman of a round is chosen from the highest score in the scoreboard. The main objective of the shaman is to kill all other mice.

The main weapon of the shaman is cannonballs. The cannons are moved to the top of the summoning list, for convenience. The shaman can still build normally, like in normal rooms.

The ice cube is still available in the shaman inventory, although it is unusable since mice cannot enter any mouse hole. Portals are available, which might be used together with cannonballs for tricking mice. Skills that allow faster summoning or can kill mice easily, such as Teleporter, Companion Crate, Earth Symbol, Leaf, Handymouse, Landslide, Reflex and Master Summoner, have no effect in survivor rooms.

Divine mode is disabled in survivor rooms due to its extremely high range. Hard mode and totems are also disabled.

The shamans have a power called meep, which is used by pressing Space. Using meep will repel the mice surrounding you, and the closer the mice, the stronger the effect.

Meep was originally designed for dealing with "huggers" (people who stick too closely to the shaman). However, some huggers try to jump as often as they can to avoid being meeped out of the map, and also be launched to a higher area, increasing their chances of survival.

If you are looking to evade a meep, simply get your avatar to match the corresponding position of the shaman, or near it. Then, if the shaman meeps, you will be propelled up, instead of to the side.

Meep has a cooldown time of approximately 8 seconds, the cooldown bar is only visible to the one with the ability, located on top of the mouse.

Meep is often frowned upon by some of the player-base, since it can be considered overpowered and a "noob" action.

The meep skill can be given to a mice by the Meep! skill from the Wildling skill tree, often used to help, or favo a particular mice ( favoing is where you try and save one particular mice, usually your friend and most people do this by ballooning one mouse or giving them special powers to help them live, this action is frowned upon by some people because it is considered "unfair" )

The mice should try to stay alive as long as possible until the timer ends, and the shaman should try to kill all the mice. It is impossible to get cheese and return to the hole, since the maps don't have any mouse holes. Score gaining is different from normal rooms, as explained below.

Hugging (not to be confused with the hug emote) is a technique used by some mice in order to survive. Mice stay extremely close to the shaman so that they cannot be cannoned without the shaman running the risk of killing themselves. Often, this can get you killed as well as the shamans can still use the "meep" ability.

Totems used to be used commonly in survivor to make killing or blocking easier for Shamans. However, they are usually frowned upon by many mice. After these incidents, hard mode has been disabled in this mode so totems cannot be used.

Some totems or builds like the anvil god, cannon orbit (a set of 4 or 5 cannons connected to a ball by C or V nails, with the ball having a rotating world nail in the center of it) or most other gods will usually result in a vote-ban. It can also lead into computer crashes or lagging.

(As of now using anvil gods or other potentially game-crashing builds can get you banned.)

In survivor rooms, the highest score on the scoreboard will be the shaman, but the scoring system is different:

A few times, P11 Vampire Survivor maps will occur. In these types of maps, a random second player is turned into a vampire. You can easily see who's the vampire by their different skin and their red nametags. If a vampire is on a mouse for a few seconds, that mouse turns into a vampire and have the ability to infect other mice that have not been turned into a vampire. If all vampires die and time left is more than 20 seconds, the time left will be set to 20 seconds. Often, there is cheese spread around the map. This is there to trick you - touching it will make you slower and easier to be caught by the vampires!

Survivor has badges as its main rewards, and 20 experience points every time you kill all the mice as a shaman, or survive as a mouse.

If the shaman is dead, you get no rewards for surviving as a mouse.

After an update in 2016, it became possible to earn Cannonball Coins in survivor rooms to spend in a village room. Coins are earned for killing mice as shaman, and you will receive them even if you die after killing the necessary number of mice. One coin is awarded for every 4 mice killed. The max number of coins that will fit in your inventory is 200 coins.

Survivor coins can be obtained at the end of a game if it lasted at least 30 seconds and if the room is not protected by a password.

Some item can only be bought after their Unlock Condition is met. Survived rounds / killed mice must be in survivor rooms.