Shamans have the ability to summon items in order to help their disciples reach the cheese and hole. These objects may be assembled in creative ways to form contraptions to solve a given puzzle. Below is a collection of sample creations you may build.

To learn more about the basics of building, visit the official Transformice tutorial and see the "Shaman" section.

The airship is an independent floating platform. The airship consists of a platform on which mice can lean on balloons and / or runes to raise it. Airships are fun, but not quite effective or safe. Make one new airship - put the board on the ground. Then, at an angle of 45 degrees upwards. Attach another yellow nailed board to the 1st yellow nailed board at a 45-degree angle down. When everything is ready, go in and place the balloons for takeoff.

Note: Try to avoid the right side of this until ready to exit.

Several maps require shamans to compete over who rescues the most mice into their own color-coded hole. Do your mice a favor and brush up on your battle skills so a fellow Shaman doesn't knock you over the edge.

During battle, a shaman traditionally attempts to block the other shaman's hole, and, in other cases, shamans must block access to a particular area. Shamans should be careful as to avoid trapping mice in the blocked-off area or block both holes. When this happens the Architect skill can be very useful.

Bridges are any contraption designed to cross over a gap. Shamans must be careful when constructing a bridge as to ensure that it doesn't topple over or trap any mice beneath it. Most bridges are built with long planks and supported by transparent short planks.

An elevator is any device created by the shaman that lifts mice vertically.
Many elevators utilize the motor nail.

Another type of elevator, shown to the right, is the classic short plank 'permanent', accessible by pressing B. You then balloon the plank, and permanent that which the short plank, give it a box, and then have it explode upwards with the mice on it.

A pile elevator is a very simple elevator that does not involve nails or rotation. They are usually built if the shaman can summon quickly. They are built mostly from planks.

Ramps are short contraptions built by the shaman to reach an elevated platform. They often must be constructed in tight spaces, and must avoid trapping mice behind them or blocking an objective. Simple ramps are constructed from planks, but more complex ramps may incorporate other items.

Perches can be created by the shaman to help the mice get the cheese or enter the mousehole if it is too high to reach. Most can be built with boxes and planks.

A catapult is a contraption made to launch mice to high or far places that they can't get to by regular means.

Place a B-anchored plank under the target you want to launch, then place a C-anchored large plank on one of the sides of the B-anchored plank. Next, summon a cannonball in the direction of the yellow-nailed- planks. After the creation is up against the wall, place another cannonball as shown in the picture.

NOTE: You can also skip all these steps if you wish. All that is needed is a non-moving cannonball, and then you can spawn a cannonball under yourself.

In several stages there are dangerous exploding objects that will kill mice if they get to them. The general technique here is to use invisible objects to create a corridor through which your mice can safely run. This can be done either as a series of invisible boxes, or by connecting a large plank to one side and support it on the other with another large box, which tends to cover more ground. Remember that Spirit affects objects - you can build a couple boxes around your mice and then spirit your mice and the boxes to the other side (this requires the mice to not blindly dash forward).

On some levels, the cheese is high off the ground or across water. Creating a lot of boxes (or box spamming) could create an improvised floor or bridge, allowing you to get across gaps. Although this isn't very practical and often results in poor little mice being trapped in between big boxes. To prevent mice from knocking the boxes out of place, create a red-nailed small plank over the boxes. The hotkey 6 makes box spamming easy to do.

First, ghost a vertical short plank with the red nail so its bottom is near the ground, and then attach a long plank to the bottom of it with a blue motorized nail (counterclockwise) in its center. As it rotates, knock the long plank's top end to the left either by jumping on it or using a cannonball, and as it draws level with the ground, attach a large crate to its now left side with a blue nail. At this point it will either slide into a position similar to the picture (right), or the crate will get stuck level with the ground. If this happens, add balloons until it's free. Once the crate is in the correct position, add a second ghosted short plank with a red nail just above the first as per the picture, otherwise the springboard is liable to break. Finally, just add balloons to reach your desired strength (be aware that every additional balloon increases the chance of it breaking.)

It can be helpful to make the springboard completely invisible, and then add a short plank with a yellow nail as the final step to avoid mice disrupting it's construction.

Place a ghosted plank with a red nail on the ground, then attach a ghosted yellow-nailed long plank, which can be nailed with a transparent red-nailed small plank. Finally, place a long plank with a blue nail at the top. Use a small box to prevent falling mice. Fill all of the free space with balloons.

Attach a transparent vertical plank with a red nail and anvil at the tip. Make as many of these as you need to get to your destination. It's not as practical as a normal bridge, but if you want to build something else, this should do the trick.

Attach numerous balloons with a yellow nail to a non-stationary (dynamic) object. Use as many as you need to lift the object. This is useful in levels such as 2, 24, and any level where there's a big block in the way, or you can't get rid of something by shooting it. It can also be used for trolling on 72, 75 (if you can get them onto the blocks before they fall), 115 (if you can manage to float away before they get to the block), 100 (if you can beat the runners), and just about any map where there is a dynamic object that is essential to completing the map.

Lonely mouse on a See - Saw with no one to play with.

boom! it can launch everything. anvil launcher 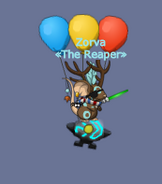 Unpractical and frustrating to make, but fun as hell to sail :D

The Tunnel of DOOM! 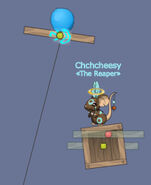 Wow! That stretchy balloon! I wanna ride it! Mememe!