13
Shaman 2016 is the thirteenth adventure of 2016 and the first content adventure of the year. Because of this, it holds unique characteristics in bulk compared to other adventures. This is the first adventure of its kind to not have its own event map. Instead, players must obtain feather currencies while saving mice as the shaman in any room, which players can spend in village rooms in order to obtain items, including badges, cartouches, and titles, of which the badge is able to be re-obtained multiple times.

While Shaman 2016 is labeled as an adventure, it is merely an update; its content and features last permanently, like those from Shaman 2015 did.

This update, or content adventure, focuses on the Shaman and adds a new currency into the game which is earned by saving mice as the Shaman. Its style is the most game-oriented out of all of the adventures. This adventure does not feature an old title as it is a shop-related content adventure.

This adventure does not feature a new map. Instead, it relies on a specific area of Room 801’s map (present in villages) and every Shaman map that a player is a Shaman in. To obtain feather coins (also known as Shaman coins, or simply feathers), players must save their disciples when they are the shaman. Players receive one Shaman coin per 4/5/6 mice saved in divine/hard/normal mode, respectively. Depending on the player’s selected shaman mode, a certain amount of mice saved earns one feather. The variable amount of feathers is contingent on the mode’s difficulty.

Tigrounette, Elise, and Papaille are NPCs whose actions and movements are specific to one's client. All of these NPCs will face the player, regardless of that player’s Y-coordinate (see gallery). Players can trade event currencies on any village map by clicking on the Tigrounette, Elise, or Papaille NPCs. Because this event is a content adventure, its currency is permanent and will last after the event.

Note: The player has to be within a certain radius of an NPC in order to trade with them (see gallery).

This event introduced the following elements to Transformice’s story

Shaman 2016 provided a simple addition to NPCs, which was previously mentioned. NPCs now face the direction of the player, allowing for more interaction. Lore-wise, this means that characters are now more animated and are not simply just immobilized sprites. The characters Elise, Papaille, and Tigrounette do not just breathe now, but they are also programmed to face the player. Thus, they pay more attention to the player and are indirectly beckoning them since they each have their own shop. This is the maximum amount of interactivity that has ever occurred between a player and an NPC.

Tigrounette, the co-CEO of Atelier 801, had added his own character into the game of the same name (now Oracle). This character is located atop the rightmost house by the spawn point. The exact location of the Tigrounette character is at the very edge of the house’s roof, at the left. This is what makes pushing the character off the roof so easy. Most likely for convenience, it is worth noting that Tigrounette (now Oracle) is fairly close to Elise and Papaille.

One may easily notice that Tigrounette (now Oracle) looks like an ancient Greek due to the attire. This attire is Elisah’s fur, which is heavily influenced on ancient Egyptian and ancient Greek patterns and style. In ancient Athens, the supreme court was known as Heliaia. Its judges were known as heliasts, or reckoners. Since Tigrounette offers the title « Heliast »(390) as a reward for being reckoned a certain amount of feather coins based on one’s shaman mode and amount of mice saved, it can be concluded that this character has ties with Greek culture. This links up the attire, the theme of Shamans, and this content adventure all into one.

As of Racing 2016, the rename of the NPC from Tigrounette to Oracle reinforces the theme of Greek culture.

With this content adventure, it was brought to light the idea that the rightmost tree house might certainly be the home of Elise and Papaille. If not, this may simply be their shop. It being the couple’s home seems more reasonable, though, as it is furnished with a sink, reading chair, and manger filled with straw to act as a bed. Further discoveries of the importance of locations in Room 801’s map may be revealed with future currency-based content adventures.

Because this event is a content adventure, the new badge is stackable. 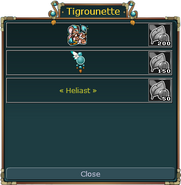 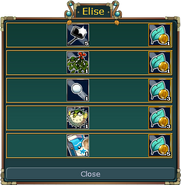 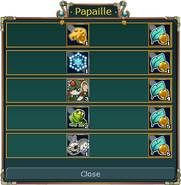 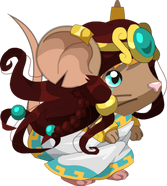 HD version of the Tigrounette NPC 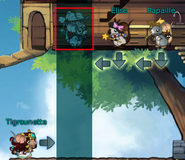 The village NPCs facing the player (inside red square), regardless of their Y-coordinate (in dark)