The princess and the treasury are in danger under the hands of evil forces. Travel back to the ancient medieval times to gather resources, craft items and get stronger, then fight off the monsters!

was released and can be obtained from Laura.

Each round lasts 3 minutes. There are 2 maps: the mine map and the castle map. At the start of both maps is a crafting table

to craft items and Laura's shop. Both maps have crafting recipes

that you need to unlock and portals

that teleport you to a different location of the map.

Unlock crafting recipes by ducking at

Items are not stackable in the inventory. Resources used to make items (e.g. sticks

Mine using a shovel.

for every 5 monsters you kill. You can get up to 5

Event-themed collector items were added to the shop and available to buy for 14 days. 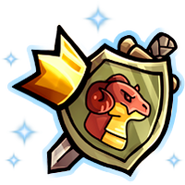