Mycity is a module that is city-like. In it houses can be bought and various jobs and quests are available.

It was previously available at "#paintball0mycity".

NPCs' (clients) locations on the map, in a broadly clockwise order:

A list of locations and the characters in them, from left to right.

To access the island, players need a boat, which is obtained after completing 1 quest.

All jobs can be joined by clicking on a character and then the "Work" button.

Sherlock
Police station
Cops can arrest thieves during their robbery timer by pressing Spacebar on them. By doing so, they earn money.

They are alerted when a robbery occurs by a message in the chat.

$130–12627 per order
Chefs can deliver orders to NPC's. To become a Chef talk to Remi at his restaurant (on the right Island).

To deliver an order you need to stand next to character who placed the order and click on them (you need to have a wanted dish in your bag). Orders can be found on the orders screen at the restaurant.

$10–10000 per sold seed
Farmers can plant seeds and harvest plants on the farming plots available at Oliver's garden or their houses. You can buy random seeds at the Seed Store. For players to plant or harvest at their own houses it is not required to be a farmer.

In the house you can activate the build mode by clicking to the house icon on mycity module menu.

$15–10000 per fish
Fishers can fish by pressing Spacebar near water (costs 10 energy). After some time, a message appears at the center of the screen with a picture of a fish. Then, the player must press Spacebar again to fish more.

Players also can sell fish to Patric by clicking "Drop" in their inventory.

Island, Santih "Here are a lot of people that still dare to fish in this pond."

$200 - $
Miners can mine blocks with numbers by clicking on them. Sometimes blocks can contain ores. Not all blocks can be clicked, however, each block needs a certain number of clicks to be destroyed. The Ores can be sold to Goldie.

Pablo
Market (inside at the right)

Their nicknames are white (default color) but red during a robbery timer.

After a robbery, a timer appears until the robber receives the money. Robbers can only be arrested by cops during this timer. During it, robbers cannot enter the mine and Oliver's house.

A robber that gets arrested is sent to the jail inside the police station, but he can escape through the toilet until the jail timer is over. A message also gets sent to the chat: "The thief (thief's name) was arrested!"

Shops can be robbed by pressing Spacebar on the characters inside them. The characters run away and after some time re-appear, allowing to rob them again. All shop robberies give $250.

For a few seconds after a shop robbery, a bubble is on the robber, which prevents them from getting arrested immediately.

A list of characters that can be robbed and the shops they are inside is below.

The bank can be robbed for $1100 when it closes at night (once every night). Players do not have to be robbers to rob the bank.

dynamites must be used, one on the exterior door and another on the door at the left, inside.

After the exterior door explodes, the bank can be entered by going to the door (not by pressing the go button above the bank).

After the door at the left explodes, the robbers' screen starts flashing red and cops are alerted of the bank robbery. The bank cannot be entered anymore; the door looks normal again and "robbery in progress" text appears on the bank. Any players robbing the bank that are not robbers become robbers.

The gold vault is at the third floor but to obtain the gold a code is required, which can be entered in by clicking on the door of the vault. The code consists of 4 digits, 3 of which can be found on a paper (

), which can be in the police station, the potion shop, the mine or other places. The last (4th) digit must be guessed. The code is different in every Mycity room but it does not change. Note that there is no backspace button, all digits must be entered for the entered code to reset. When the correct code is entered, it turns green.

Then robbers can enter the vault and press Spacebar to obtain the gold. As with shop robberies, a timer starts until they receive the money.

If robbers do not exit the bank quickly enough, Colt appears near the door and prevents them from exiting the bank, by sending them to jail with a timer, similarly to player cops. A message in the chat regarding the arrest also appears.

The items can be accessed by clicking the bag (

) at the bottom of the screen.

Go through the labyrinth in the mine into the big empty area and keep running to the right.Use boat to get across and there will be John, who sells dynamite,clock,chest.

). Using this menu, players can spawn vehicles, including the boat obtained through the § Quest 01: Building a boat. The boat shop is in the mine and you need to click to the ladder to exit from there

Secret boat shop: Need to have the Lucky flower and the Goldenmare in the inventory, as well as $500,000. Then click on Blank the NPC ,then walk right into the secret shop,and the Bugatti and Yacht will appear. 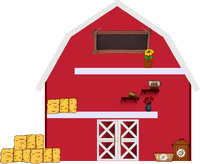 You can trade items with Dave, list of items changs everyday. Also some items can be obtained only from Dave (like eggs, garlic, etc.).

The quests can be accessed by clicking the book (

) at the top-right corner.

Recipes can be accessed and cooked by opening the oven. Each recipe needs some ingredients to be made.

Houses can be placed and bought by using a menu that appears upon clicking an available house location, on the sign of which "For sale" is written.

On all houses their number is written. House #11 is not a player's house but a character's, Oliver's. The list below is from left to right.

Players' profiles can be accessed by using the chat command "!profile" followed by the player's nickname. The profile displays:

Two stats are displayed at the left side of the screen, below the quest button, energy (

If one stat gets to 0, the player is teleported to the hospital to heal, paying a tax of $600, and being unable to move for some time.

Both stats can be regained by using food and drinks. Energy, however, is also regained automatically.