A mouse hole, or simply hole, is the element on maps to which the mice bring the cheese after collecting it. Mice must bring cheese back to the mouse hole in order to complete most maps.

The Easy Victory skill lets the shaman get mice to the hole instantly if they have the cheese and at least one mouse has cleared.

Regular mouse holes are the standard holes found on most maps. There can be one, two or three regular holes per map. Which hole the mice enter on a map does not matter, although some holes are easier to reach than others. Maps with regular mouse holes can have no shaman, one shaman, or two shamans working together. Any shaman on the map will receive a number of points equal to the number of mice that entered a hole with cheese.

Shaman mouse holes are pink and blue holes, respectively, which will always appear together on Dual Shaman maps. There will only be one of each, and there are never a gray mouse hole on a Dual Shaman map. There are always two shamans on such maps: one pink and one blue, for each of the mouse holes. Each shaman will receive a number of points equal to twice the number of the mice that entered the hole of the same color as the shaman—a pink shaman will not receive any points for mice that went in the blue mouse hole and vice versa. As a result, the shamans often fight each other to gain the privilege of mice entering their mouse hole.

Tribe icon on the Atelier 801 forum 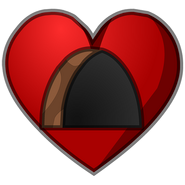