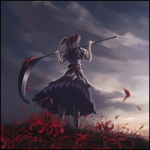 Got a general question / comment you wish to make? Try the wiki forum, or if it's a question about the game you may wish to consider instead asking on the Official forums.