Labyrinth is a module.

The objective of the mice is to grab the cheese at top-right corner and bring it back to the hole at left-bottom corner by traversing the labyrinth. But it isn't that simple, the players are given only 3 minutes, while the maze will change every 15 seconds.

Any player that win the previous round will be able to summon portals in the next round, this can be used to place shortcut for him/herself or slow other mice.

Each portals can only be placed once by a left click anywhere in map, and they must be near each other. They last permanently until the round finishes, and can be used by anyone.

Occasionally, there will be night mode labyrinth played, the vision is reduced to a small circle around the player's mouse. The labyrinth won't change in this mode, and therefore the player should remember the path back to the hole after getting cheese.

Unlike normal mode, the objective only needs to be completed once. The first player to complete the objective will win and the rest will be killed, and the next round will be played. 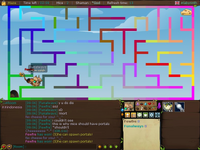 Occasionally, the labyrinth will have colored walls, forming a rainbow-colored labyrinth. Other players' name will also be colored.

Every round, everyone's score would reset to 0, and the winner will be announced, "<Nickname> has won! (S)he can spawn portals!"