This was an adventure aimed towards large amounts of teamwork. The main objective was to safely get one's team of mice to the rock island and obtain a ribbon, while trying to lower the other teams' odds at success. Because of this, it was crucial for all mice to participate if possible.

This is the first adventure with lore that does not focus on the deities of Transformice.

The Hot Air Balloon Competition is an annual event that takes place in the cold month of January to warm mice up. This can help lead to the assumption that Transformice is more similar to the northern hemisphere as opposed to the south, which is warmer during January. The balloon competition is one of many friendly competitions that have taken place in Transformice, another being the snowball fight Lua map from Christmas 2013.

As for modern mouse technology, it is notable that mice have taken natural resources to their advantage. Because mice have been confirmed to be small as per the art proportions starting with Astrological 2016 map, some objects like coconuts and leaves, both of which can be found relatively close to ponds/swamps, were proven to be of value. Hot air balloons are made from a sliced, hollow coconut to act as a basket. A rope and some sacks help control the weight of the balloon. Somehow, mice have developed a replacement for the burner of a hot air balloon, instead creating energy by pacing left and right. Lastly, a leaf is what helps make the balloon fly, but is easily manipulated by the direction of the wind. It is connected to the coconut with thin string that act as grabbers. Judging by the context of the official announcement, this technology has been present for a while since this is not the first time there has been a Hot Air Balloon Competition.

ribbon on the island at the end of the pond. Unlike most events, this event required teamwork, especially since if two airships crashed into each other or branches, they exploded. The event had at most 3 balloons, each with 1 pilot, and multiple passengers: 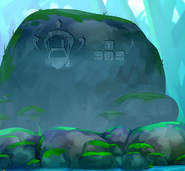 The greenery around the pond 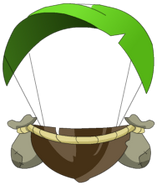 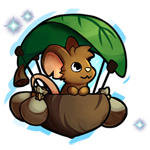 "Spoiler alert!" A sneak peek of the third adventure, which was posted on Transformice's Facebook [4]