Elements of the event come from previous Halloween events as well as a few new game mechanics.

Once again, Von Drekkemaus and Buffy are the main characters of this event. They and their child, Voldemouse, can be found in the manor with the slot machines.

[edit tab] [view tab]
The maps are played every 10 to 30 minutes as long as there are at least 4 players in a room.

Like in the last event, the event maps are started in all rooms at once to prevent event farming.

The room is in night mode and only bright flashes show the rest of the map for a split second, unless particle effects are turned off [an instance where night mode is indefinite throughout the map].

This is the Library of the von Drekkemaus manor. Here you have to share control with all the other players to move a box of mice. Push it over the candy to collect it and don't fall down!

BugAt the start of the map, the WASD controls may kill your player mouse. Use ↑, ←, ↓ and → instead. 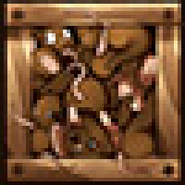 A swarm of mice witches needs to get through the pumpkin patch! Watch out for these thorny vines!

BugAt the start WASD controls did not work, try ↑ or Space instead.