N/A
Grapnel is a Physicist skill. It allows you to hang anywhere, but disappears out after a given amount of time. Each level grants the shaman an extra two grapnels.

The grapnel works by pulling you to the place where you summoned it, so if there is a wall blocking your way, you cannot cross over it. However, if the Shaman's mass is low and the grapnel is summoned far away enough, it is possible to clip through summoned shaman objects while snapping to the grapnel location.

You can move left or right to swing using the grapnel, giving you a slightly bigger overall summoning range.

You can disable a grapnel early by pressing ↓ or S. If multiple grapnels are active, the earliest placed grapnel is disabled.

A shaman using grapnels can swing themselves towards a desired location, release the grapnel, then summon another one, allowing them to swing to their desired location as if on a monkey bar.

A heavy shaman, such as when carrying multiple cheeses, may need multiple grapnels to hang in the air. 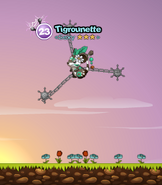