The event begins with Elisah's high priestess Berta Gooda asking the player for help in rebuilding the Ancient Capital by gathering trash soiling it and bringing it to her (in the form of four relic sets the player can fish out on various other maps). However, as more relic sets are completed, Berta's physical appearance changes - her shaman feather and markings change their color from blue to purple, her hair becomes brown, her eyes turn red, and her robe appears tattered. The Elisah statue in the Capital has similar changes as well - its color changes to a red-ish hue, strange symbols appear on it (which Berta claims are drawings "of Elisah's spell, to strengthen it", and it becomes covered in cracks.

Once four relic sets are gathered, Berta tells the player that everything is going as planned and orders them to leave while she performs a ritual which she claims takes some time to perform. The next time the player visits the map, a cutscene plays showing Berta summon a giant Anvil, which she then throws at the statue to destroy it. After that, a pair of wings appear on Berta and she flies off in the direction of a mountain.

After the cutscene, the second part of the event begins. Mirolle Gooda appears in the spot Berta used to stand in, and wooden scaffolding is seen in place of the statue. Mirolle then tells the player to collect the pieces of the statue (represented by another 4 relic sets). When relic sets are brought to the capital, she explains the importance of the statue, mentions Elisah once saved her from drowning, and reveals she is Berta's sister. Once all 4 relics sets are collected, the statue is rebuilt and the event is completed.

The story of this event was revealed to be the starting point for the story of Atelier 801's upcoming game, Transformice Adventures.

Some time has passed since the last battle against the Anvil God... The little mice were brave and together they defeated this vile creature.

But since, the capital became a desert place...

Everything that made its glory once is now in ruins and everymice that lived there had to leave...

But one mouse couldn't stand to see the city in such a state and decided it was time to rebuild it back to its former glory.  This mouse is not just an ordinary mouse: her name is Berta, Elisah's High Priestess, and as such, she would do anything for her Goddess.

Imagine how she must feel when seeing this once sumptuous city dedicated to Elisah's glory soiled by trash in the water...

The capital needs to be rebuilt and Berta will need your help to make the city glorious again!

During this two months long event, help her clean the surrounding waters from the trash: collect 5 specific pieces to rebuild a relic.

Bring Berta 4 full relics so she can put the capital in order and bring the mice back to the city!

Who knows what the capital will look like once it's rebuilt?

The event maps feature a series of water ponds for you to fish in. You can fish by pressing and holding ↓ or S. After 10-20 seconds, you will get a relic, gold ticket

or nothing. Relics are used on the new Capital map where you look for the relics that you have on the board on the left and click on them to submit.

From 1 August 2018, when part 2 was released, players who have completed relic sets A to D on the Capital map (part 1) can start to complete relic sets E to H on the map (part 2).

Relics can be found across all fishing maps. 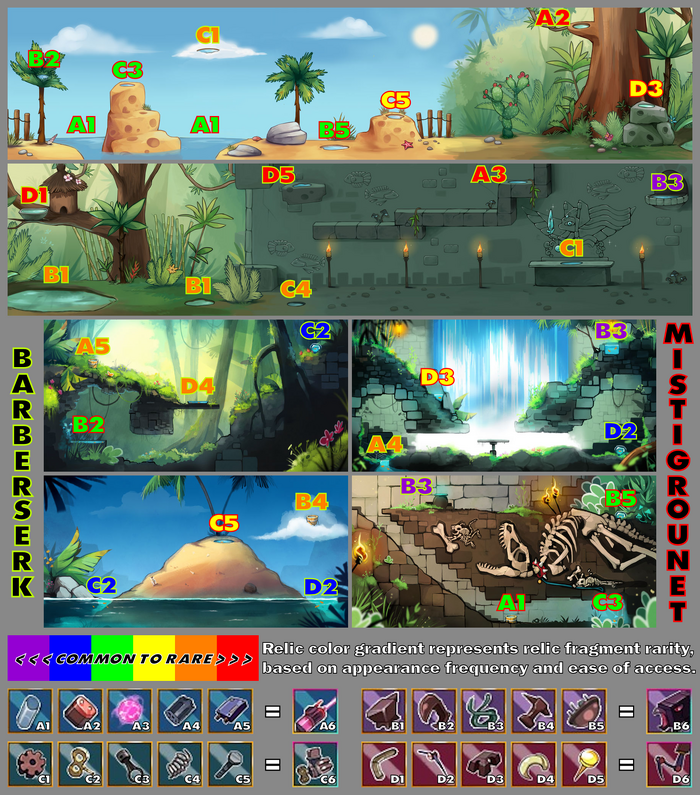 Relics sorted by rarity, based on number of map appearances and locations, from the most to the least rare:

Part 2 can only be unlocked by completing part 1 and waiting until the next Capital map for the board on the left to change to relic sets E to H. 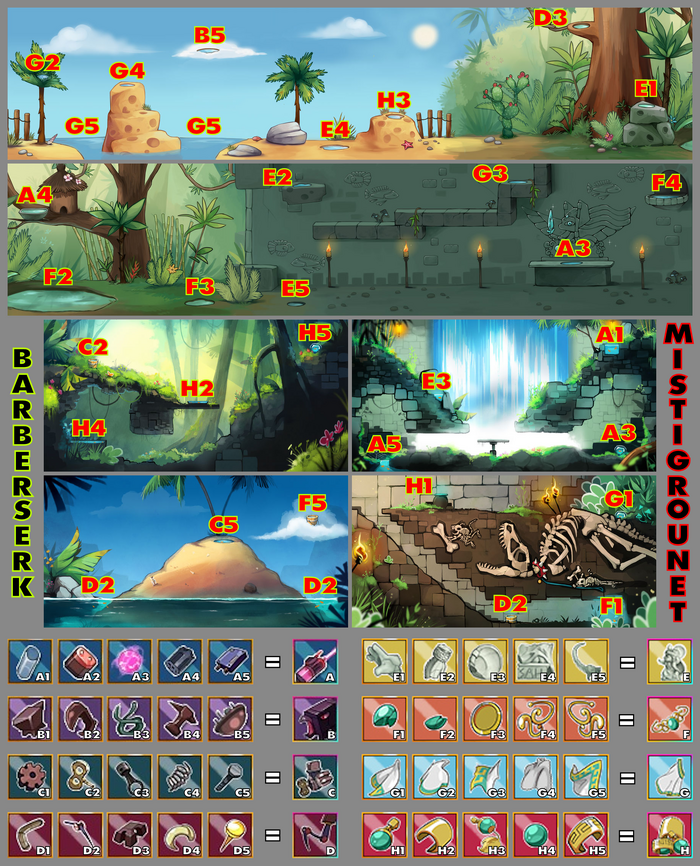