This event occurs about every 20 minutes.

On any fishing map you can bring out your fishing rod by holding down ↓ or S and keeping it pressed until you get a reward, or the fishing rod disappears. You can also fish using Ctrl+↓. This can be preferable since it's glitched, and doesn't require you to hold it down to earn a reward. When using the glitch, you can also move around in a fishing area and still earn the reward (although your rod won't show and if moving prize won't show above your head).

This year, the Fishing event has been combined with Pirate event, so maps from both events will play.

Relic fragments can be found across all fishing maps. 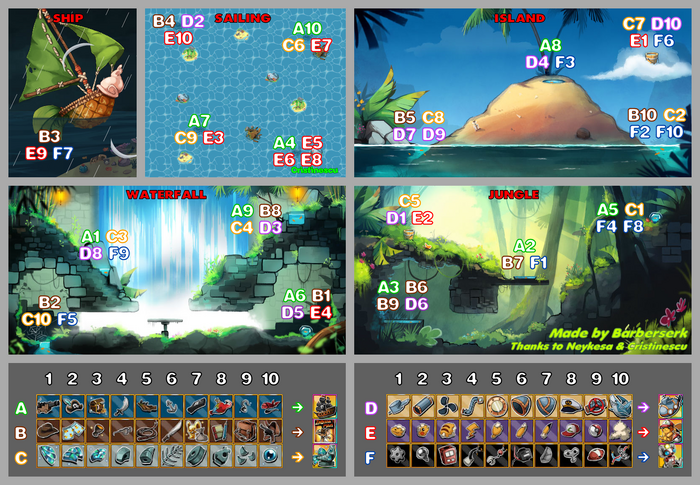 The map from Pirate 2016 returns! You must get on the boat before it leaves, and not fall off as the bad weather attempts to rock your boat. There is also a small chance that you would get struck by lightning and die, so be careful! This year, you can also fish while on the boat using ↓ or S.

Fortunately, the map has a lot less lag than it did in prior years. The boat is a lot less prone to randomly sinking.

The title « Tonnerre de Brest »(253) is available upon completing the map just like previous years.

BugSometimes, the boat sinks on its own due to lag or just glitches, killing all the mice on board.

Relic positions this year are different from last year. This is because there are two more relic packs compared to the 2016 event so fragments have to be redistributed to make sure each location on each map has a few fragments.

This is a new sailing map where you control a ship. Press Space to add / remove your sail to control your movement. You can rotate your sail counterclockwise and clockwise using the left ← and right → keys respectively.

The goal of the map is to sail to the darker areas of the map where the "fish" are located. This can be hard as there is nothing to stop you sailing past; you must instead sail towards it and time the removal of your sail before you reach the dark area point so that you slow down into it, not past it.

Relics come in separate packs, with each relic having 11 fragments: 10 fragments, and 1 relic (part 11). Obtaining one complete relic will earn you a prize and 20 adventure points that will be shown in your profile. Up to 120 adventure points can be collected from this event. The completed relics are not tradable.

Boats from the new event.

Stars that shows where the wind blows.

An island from the map. 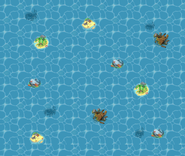 Ship in the Pirate map. 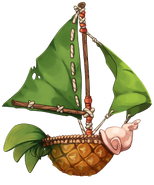 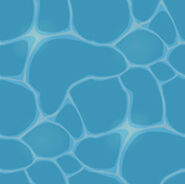 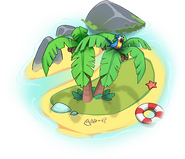 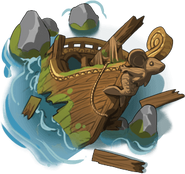