The fishing maps have some fishing ponds on the map. To fish, press S/↓ near one of the ponds. You can either catch consumables, a cheese or a treasure chest, which is rewarded to you at the end of the round. All mice are dressed as Indiana Mice for this map.

However, there will be several traps that will kill any mouse that gets hit, so players should be careful.

This map is from an earlier Fishing Event. Mice will pick up cheese at the spawn point, and need to cross the ocean in the pirate ship in order to reach the opposite side of the map, where the hole is located.

However, thunderstorms will strike and makes the boat unstable. Next storm will calm the boat down. This will happen multiple times in one round.

This map displays the player's artifacts they have caught in the fishing maps. The mice don't have anything to do other than wait for the map to pass.

BugSometimes the @1 map's boat can sink from lag 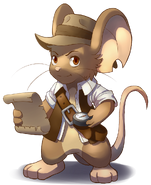 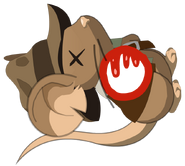