Mice can perform various emotes, also known as actions, to visually show their attitude. Most are performed by pressing the icons on the user interface (located to the right of your mouse), but some can also be performed by using chat commands, E, or consumables.

There are two types of emotes: single and interactive.

Originally, dance, laugh, and cry were the only emotes available, but new emotes were added later.

Capturing the cheese while doing an emote will end the emote.

Emotes are disabled when there are at least 30 mice in the room. 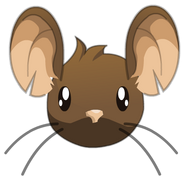 Front of mouse head by Melibellule for the original dancing animation

Indiana Mouse standing as a mouse

Elise's drawing of the dance button for the Dragon 2017 enigma
Français Русский
Community content is available under CC-BY-SA unless otherwise noted.
Advertisement