Omnipresent
Elisah, the Goddess Shaman, is Transformice's deity and is considered to be the one who gives shamans their powers, skills, and upgrades, and is given gifts in return, such as cheese. Her background is arcane, although this can possibly change in the future due to lore being emphasized as of 1 January 2016.[1]

Elisah is a brown mouse who is possibly much larger than regular mice, as she takes up a whole cloud (Although spawnable cloud objects have been added to the game as of recently, and appear to be about the same size compared to a player mouse, implying Elisah could be the size of a regular mouse just as well). She has deep blue eyes that are very similar to her markings and bead motif. Elisah has a tail item that is very similar to that of a shaman, only much larger. Some last notable features include her very long double-layered wings and her golden halo.

Elisah has very long, wavy hair that holds a golden tint, capturing the essence of Transformice's history, similar to that of Egypt, which is geographically very abundant in gold. Unique like the pigtail that hangs along her left shoulder, Elisah has one long braid that extends high above the others when blown by the wind. Another long braid is visible among her other wavy strands of hair. To continue with her Egyptian impression, the Goddess Shaman's hair is heavily decorated with turquoise beads.

Elisah's earrings are located at the top extremities of her ears and she wears a golden circlet that displays a turquoise bead, resembling a pearl. On her arms are golden bracelets. One can also note that she is wearing what appears to be a very long Egyptian robe that slants down her chest and extends to beyond her feet. On all the ends are cyan and golden patterns.

In August 2013, the Fishing 2013 enigma, the Goddess Shaman made her second appearance on Transformice in the form of a wall carving. It was in this Fishing Event that her true name was discovered: "Elisah." She gave each mouse a random parchment after bringing the cheese into the hole on maps during this event. After successfully linking all of the pieces together, Elisah's enigma was almost solved. Mice later discovered that they had to whisper "Elisah" atop the Goddess's shrine in order to earn the title « Adorer »(299).

In August 2014, the first discovery made regarding Elisah finally came to Transformice: shamans were given their powers by Elisah, as she gave each of them a feather from her wings and a lock of her hair.[3]

During the 2015 Fishing event, a giant temple was found containing a carving of Elisah. Although this did not allow for much mobility in the lore of her, it gave an enigmatic sense to players.

In Epiphany 2016, the story of the Three Shaman Queens' journeys to give the Shaman Goddess gifts was revealed.

As revealed in Dragon 2016, a long time ago Elisah was touched by a snake's story and granted him a fraction of her powers.

Valentine's Day 2016 likewise revealed that Elisah has been undoing the evil done by an unnamed Cruel God by helping mice find their soulmates on this holiday. This helps reinforce Elisah's loving nature.

In the Carnival 2016 map's background, there is a statue of Elisah that mirrors the Christ the Redeemer statue in Rio.[5]

Armageddon 2016 revealed another opposing deity of Elisah, it being the Anvil God. Because all objects are spawnable by the magic that Elisah has provided to the world of Transformice, it can be assumed that the Anvil God is indirectly her own creation.[6]

In Dino 2016, she had to add the final touch, the red gear, to the mice's time machine. Unfortunately, she dropped it due to a sudden movement from one of the mice and it shattered into pieces. 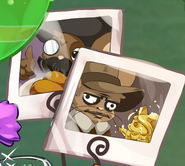 Gold statue of Elisah on the photo board during 6th Anniversary 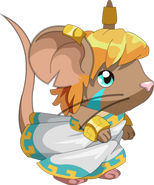 One of Elisah's feathers from Armageddon 2016 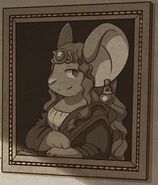