15
Easter 2016 is the fifteenth adventure of 2016. This adventure, like in the Normal and Vanilla game modes, requires the shaman to help the mice collect the cheese. However, in the event map, the mice have giant eggs on their back, which makes them heavier, and Normal mode players only have access to two B nails. When a player brings the cheese to the hole, they will receive a golden ticket (the new adventure currency), which can be exchanged for prizes with Event NPCs in Village rooms.

If players find themselves with all of the rewards for this adventure, they may continue to obtain golden tickets to spend on later adventures. 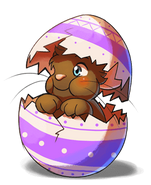 Illustration of a mouse in an egg with its mouth full, seen in the official announcement, and presumably by Melibellule[confirm]