This adventure was aimed towards climbing the blue dragon, a towering entity. On the event map, players had to collect a

lantern by climbing the dragon, a newly discovered deity of Transformice (see Lore).

In this adventure, it was discovered that a dragon (whose name is currently unknown) is recognized as a symbol of divinity. Every year, he is venerated among the constructs of mice turning into shamans and snakes into dragons. This dragon, being very virtuous, only asked for certain powers from Elisah that will allow him to protect the mouse tribe that he was adopted into.

It is worth considering that in the adventure announcement this dragon is not classified as snake nor shaman. Instead, he is uniquely a dragon (a deity nonetheless). The same announcement points out the rise from mouse to shaman, analogically confirming that mice and shamans are not associated with each other, just that they appear similar (like dragons and snakes).

Previously, it was known that Elisah gave a lock of her hair and a feather from her wings to shamans as a manifestation of her power. However, the idea that Elisah gives away fractions of her powers was finally confirmed on an official platform rather than on Melibellule's Tumblr. The blue dragon was once a frail little snake before receiving powers from Elisah, turning him into a towering, terrifying, and beautiful creature all at once. The same can be said for any other deity that may make its way to Transformice's story line, only in different forms.

Starting at the release of the adventure, some players began to receive pieces of a scroll once they obtained a lantern. On the first day, receiving a piece was extremely rare. However, the drop rate increased the next day to speed the scientific/experimental process.

Some players went about saying that this enigma is related to the Longtaitou Festival. This seemed plausible because the almighty dragon is blue and the festival takes place on the "second day of the second month", or the day that the enigma began to take a faster pace. However, this was proven to be unrelated.

Players also believed that the hidden area by the bonsai tree (see gallery) had some relation to the enigma, but it was later discovered the location of a player on the adventure map is not important.

Once a sufficient amount of scroll pieces was collected, players noticed that there was a link between a mouse's username, a plus sign, and the expression that equaled 2. This later led players to the conclusion that one's username must be shifted twice using the caesar cipher, with y, z, 8, and 9 switching to the ASCII characters {, |, :, and ;, respectively.

The objective of the adventure map was to climb the blue dragon and reach the ray of light being cast in front of the deity. The height of the map was 2228 pixels, with the width being standard. This map was Transformice's second high-scrolling event map, with the first being Christmas 2014's event map. A lantern awaited mice who completed the journey to the top, and it was obtainable by allowing the ray of light to bring them up towards it, functioning due to a water ground. Players were advised to avoid rushing, as the ascent was not difficult and could be completed easily if time was taken. The blue dragon had various aids that players could rely on to reach the top. These aids also served as checkpoints in the form of arcane sashes and grounds.

The greenery on the map

The ray of light shining on the highest ground

Two mice standing in the secret area of the adventure map. 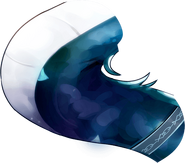 A fragment of the dragon's body

The dragon's head (used as a foreground)