31 January 2019
In this event you must collect red

presents. This can be done two ways: collect a present on a map and get it (along with the cheese) back to the hole, or simply exchange presents from another player through trade. This transforms them into

Like previous years, you can collect presents on normal maps. Presents are placed randomly.

In racing and other modes, there might be a chance that presents are placed randomly, and

they are not possible to get.

There is a map where mice have to ski and grab

snowboards scattered across the map without hitting the obstacles or landing on their head.

Players can press ← or → to rotate their mice, ↑ to jump, and ↓ to slow down. The player has to use the controls to traverse the map, grab snowboards, and avoid death.

The snowboards can be exchanged in the Jingle's Exchange map. 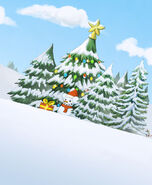 Players are Soulmates with up to three other players. Players will either be Santa, an elf or a reindeer. Around the map are 6

presents, which as a team, must all be collected and taken back to the sleigh. Being successful rewards one

. A full team (one Santa, one elf and one reindeer) can earn a maximum of 2

can be exchanged here from Jingle and Brice for old titles, cartouches, badges and cheese coins. 2

. Brice is a new NPC this year.

Map 800, previously only seen during Christmas 2011 makes a return. Shamans fight each other with shaman stuff. The one that survives, can get a cheese and enter the cheese hole.

There is a total of 60 relic fragments, with 10 relics consisting of 6 in each set. 40 of them can be found in red

presents and 20 can be found in green presents. This is depicted in the following list, by use of color coding. For example,

can be found in a red present, whereas

can be found in a green present   even after you earn a relic.

You can only get a specific relic (not relic fragment) once for this event. If you finish  a relic and then obtain all the pieces again, nothing will happen. This also allows for people to sell a "complete set" to someone who hasn't gotten any pieces yet. Note that relics are made automatically after collecting all 6 fragments, and may not be sold.

After opening a sufficient number of presents, the community was able to determine the possibility of getting each individual reward when opening a red or green present. The following table depicts the results (and the first column depicts the chance to get relic fragments):

As with previous years, snow will randomly appears for a short time along the top of maps. When this happens, ducking rapidly has a chance to make a

snowball (multiple can be obtained). You must be alive for this to work. Do not confuse player made snow (

) with game snow; game snow will spawn from the top of the map along the full width.