For the update, some visual aspects of the game were changed to fit with the winter season. Grass grounds became snowy; many decorations such as bushes, flowers, and signs also had snow on them. On 17 December, map 800 and occasional snowing was released into the game.

Six new items (Christmas tree hat, Christmas stocking hat, Rudolph nose, candy cane earring, earmuffs, and Christmas scarf) were added in the shop on the day of the update. They could be obtained at random in some vanilla maps by clicking on presents which were placed in locations that mice usually could not get to without the help of the shaman. Mice could not get the present if they were jumping; they had to be idle, running or falling (not from a jump) to get the prize. The chances of getting an item was 10%. 40% of the time, the mouse obtained one cheese. There was a 50% chance of the presents being empty. Some mice may get a prize in a map, while others may not. If all 6 new Christmas items were obtained, along with all 4 of the 2010 shop items, mice could still receive a random shop hat from presents.

Along with the presents, there was also a mistletoe in some vanilla maps. By standing near or underneath the mistletoe with another mouse, both of them would obtain one "heart" which was counted at the bottom-right corner of the game screen. At a certain number of hearts, new titles could be unlocked.

Map 800 appeared randomly in rotation, and all mice had shaman abilities, and were also dressed up as Santa (Santa's hat, red ornament earring, pipe, and Santa's beard). This generally led to chaos and fighting over who could get the cheese and bring it back to the hole successfully.

Snowing was less common in the 2011 event than 2010. It happened every 30-40 minutes, and lasted for one minute. Similar to 2010, mice could throw snowballs by holding the down arrow or "S" key until a snowball was thrown, repelling whatever it hit. However, some glitches involving snowballs were not fixed, such as anchoring issues.

The Christmas items follow a sequence to be obtained. Once you have all the preceding items, you will be able to get the next in the sequence

These items can also be obtained after completing the Christmas set: 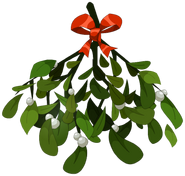 Stack of presents on map 52

The 6 new items introduced with the update. 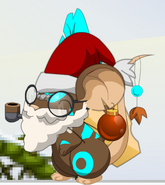