The amount of skill points shown on top of a players cartouche does not denote total skill points, but rather the amount that has been allocated. For example, if one were to be level 100, but only have 50 skill points allocated, the cartouche would display the number 50, not 100.

These come in two types:

These cartouches are purchasable in the village via special currencies, and were first introduced in "content adventures" (adventure where content added is never removed).

Only available during specific events / adventures. 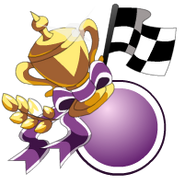 The original Racing 2016 cartouche, before being split into three parts
Add a photo to this gallery

Retrieved from "https://transformice.fandom.com/wiki/Cartouches?oldid=82530"
Community content is available under CC-BY-SA unless otherwise noted.