This adventure focuses on utilizing the ← → keys repetitively in order for players to reach the end of the parade. Players obtain checkered flags

by helping their float cross the finish line first. There were three tanks[1]/floats[2] in total. Every participant from the winning float earned consumables and checkered flags.

The objective of the adventure map is for players to make their float succeed in reaching the end of the parade before the other two floats do so. The three floats are themed as such: Cheese, Hats, and Shaman. Every player from the two losing floats die. Once a float reaches the finish line, all floats disappear. Designation for any one of these is completely random, but participation is still vital. If no mice leave or enter the room, every player’s placement in the floats remain consistent.

The winning float team is to be awarded with one checkered flag and random consumables from the ones available. Mice can spawn collidable consumables in order to speed up or slow down floats, be it their own or others’. This will sometimes lead to unexpected disasters. Some of the floats sporadically jump back or ahead, although this is merely client-side, in conjunction with a player’s overall ping. This explained an anomaly where a float may have appeared to win but ended up losing to another one.

The foreground on the map 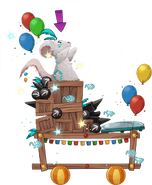