A lot of users like this more as it is in-game, easier and quicker, however it only displays a certain amount of recent topics, and once a topic is gone it cannot be retrieved. The café isn't moderated nearly as much as the forum, so quite a bit of it is filled with spammers and trolls. However, there are some people whose posts have quality.

To add/change your café avatar (same as the avatar shown on your profile), you need to upload a new forum avatar.

It is possible to style your text in the café in the following ways: 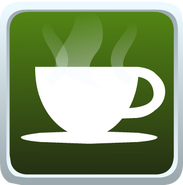 Old café button, when it was above the players list