Badges are 40 x 40 pixel collectible items displayed on players' profiles as denotations of a certain accomplishment or purchase. Any unlocked badges are publicly displayed between the basic mouse stats and game mode stats.

Badges were introduced on 28 March 2014 as a complement of the Carnival 2014 event. Their primary purpose was to replace shop items as a reward for events.

Over time, badges eventually developed into incentives for buying furs and shop items, being unlockable upon buying them in the shop. This process was gradual, taking place over about a year. This was because the gamut of furs that were released before badges received their complementary badges only after their sales ended. Newer furs' badges were prioritizing, only leading to the extension of the period of badge creation for older furs. At one point, the Lenneth's Helmet head item also received its own badge.

During this process, badges also began being obtainable upon performing actions that helped the game developers. Instances include the 4th Anniversary enigma and linking one's account to the Run for Cheese app.

Badges maintain a distinct order on a player's profile. The order is as follows:

Game mode, village, other, event, cheese-only fur, then fur—and then list down by ID #.

An "official" badge tutorial by Maharadjah can be found on the official forums, and was originally made as a bonus for the fan-made "Create a Badge" contest.

All badges won for game modes stack and feature a small number on the bottom. For example, if you have played 2,000 rounds of survivor, you will receive a badge with a "2" on it.

These badges are purchasable in the village via special currencies, and were first introduced in "content adventures" (adventures where content added is never removed).

Unlock conditions can be found on the events' / adventures' page. Badges are listed under the year they were first released, and are not duplicated.

Click on a detailed image to enlarge it. Detailed images aren't used in-game, but are provided to players so they can enjoy them.

Fur badges with little cheese icons in them represent furs that can only be purchased with cheese.

These are "official" badges that have not appeared in game, but were either shown by an administrator in a screenshot, or found on the server before release. 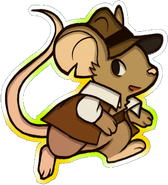 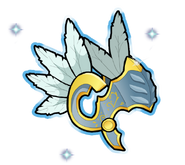 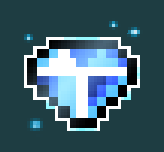