Atelier801.com (http://atelier801.com/)
Atelier 801 SARL (atelier: French for studio), is an independent game studio based in France and is best known for developing the popular browser game Transformice. It was founded on 14 October 2011 by Jean-Baptiste Le Marchand and Mélanie Christin who serve as co-CEO's of the company. The logo is a black square with a turquoise outline. There is a wind-up mouse atop the words Atelier 801.

Tigrounette and Melibellule were leaning towards "Mice Studio" when Ley suggested "Atelier 801", as a reference to the special room 801 which was originally created for testing purposes.[1] The admins liked the idea since it made a reference to the players, so they decided to choose that name. 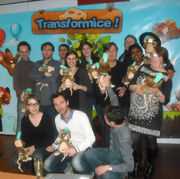