10
Armageddon 2018, also known as the Gods' Battle Adventure, was the first event of 2018. This adventure featured a battle between the polar forces of Elisah and her opposing deity, the Anvil God.[1]

This adventure focused on bringing life to a statue of Elisah in Transformice's capital, where the one and only Anvil God had broken free. Players had to obtain feathers to enable Elisah's power in the statue and ultimately make the Anvil God retreat.

Note: This map came about every 20 minutes.

The objective of the adventure map was for players to collect

magic feathers, located at the top left of the map and restocked in the same exact location. Players then had to drop these feathers under the Elisah statue by simply walking under the platform where she stands and onto an pedestal with her name engraved in Greek-style lettering. Players had to carefully avoid the Anvil God's lasers, or they died. If particles were enabled, death would have resulted in a comicbook-style scream bubble by one's mouse with varying words inside of them, such as "Meep," "Ouch," and "Aïe" (which is "ouch" in French).

A player could carry only one feather at a time, but once dropped onto the statue's pedestal, players were able to obtain another feather and repeat this process until the statue's bar was filled completely. Only two magic feathers were present on the map, but they never changed their locations.

Once the bar was completely filled, Elisah's statue was given her powers for a limited time. The statue's erect arm would release feather particles, their trajectories straight towards the Anvil God. His lasers would cease and he would slowly rock back and forth and eventually retreat into the bottom of the ground. The statue's feather particles would continue to travel off the map. Players were rewarded with random consumables and an Elisah's Tail Ornament, also called ribbon.

So long as a player contributed to powering Elisah's statue with at least one feather and the bar was filled, they would earn a reward, even if afflicted by the Anvil God's laser.

Note: You can get only one

Tail Ornament per map rotation; this is to prevent event hopping.

One method of timing was in the initial stage of the map's round. The Anvil God's first laser was aimed between the two top pillar grounds, and nobody standing on these grounds to obtain a magic feather were to be reached by his laser. The second laser was right above the statue's pedestal, meaning players who were

attempting to drop a feather as soon as the map started would have to face this laser. Thus, players were advised not to drop down right after obtaining a feather once the map began. Timing where the Anvil God's laser would be was crucial, and only dropping down or rising up after his laser was launched was important. His laser attacks recharged every six seconds. In mid-attack, the Anvil God's laser flashed black, white, and then black again, eventually fading to the ominous thin purple laser. 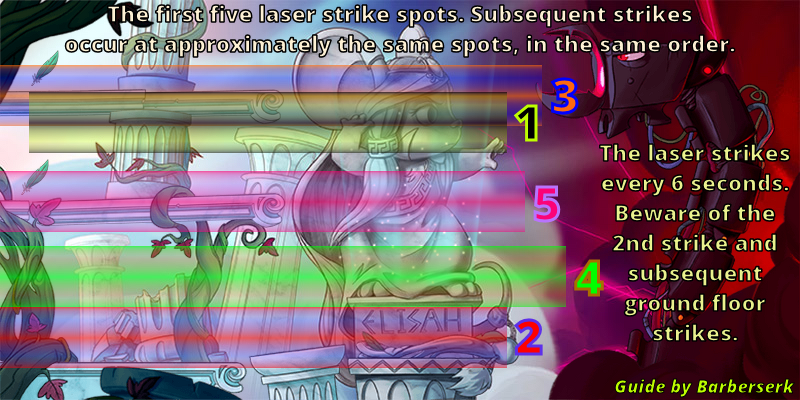 (New) was added and given to players on 16 February, after the event had ended.

The foreground of the map

The background of the map

The light-halo shining on top of the statue's platform

The platform underneath Elisah's name, where feathers are absorbed

The pillar grounds on the map

Anvil God as appears on the map