Anvil gods are constructions of anvils pinned together, with or without rotating nails. Due to the physics of Transformice (using Box2D), the cluster of anvils will rapidly spin around and launch players and objects alike around or outside of the level. Anvils have the largest mass in the game out of all the shaman items and will deliver the largest amounts of force compared to other items. It is highly popular for both entertainment and trolling uses.

Anvil snakes are a more specific form of Anvil Gods. They are built using long chains of anvils to imitate a snake lashing out at its victims. There exists a prebuilt anvil snake in map 62, which is where both terms come from.

The first reported instance of an Anvil God was June 18, 2010, on map 62. Although Anvil Gods existed before then, they were not well named nor well known until the Anvil God fancomic highly popularized it. In addition, the creators of Transformice tweeted about the fancomic when reposting fanart.

The basic Anvil God consists of many rotating anvils. The source of the power for the anvils is in the rotating anchors: the motors have a torque of 1,000,000 which renders it almost impossible to stop the force of a motorized anchor except by an immobile object or another opposite motor. The motorized anchors must pin together multiple anvils in order for the Anvil God to build up power. This process is repeated many times until the Anvil God starts to move sporadically and spontaneously with great force, shoving any mobile objects out of the way.

However, rotating motors are not vital to the creation of an anvil god. Ordinary free or solid nails are sufficient. A world nail may be used with a plank or a totem if the player wishes for an anvil god to remain in place.

There are many variations of the Anvil God that can be made by replacing anvils with other items such as boxes, balls, and planks. Some anvil gods exist as totems, which may or may not have red nails.

The Anvil God is one of the most powerful contraptions that can be built, and it has the ability to destroy other contraptions and glitch the game.

Mother of all anvil gods 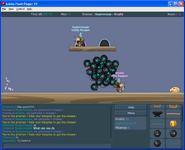 Cheese god
(made from bait) 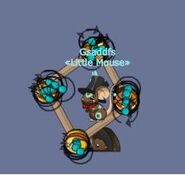