Adventure inventory items are inventory items that you earn during specific adventures/events. These items show your progress in an event and disappear once the event is over. Some of them are earned by touching a collectible.

Relics are items that must be assembled by collecting all of its fragments. Fragments are tradeable. 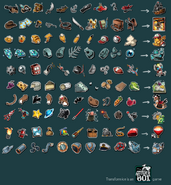